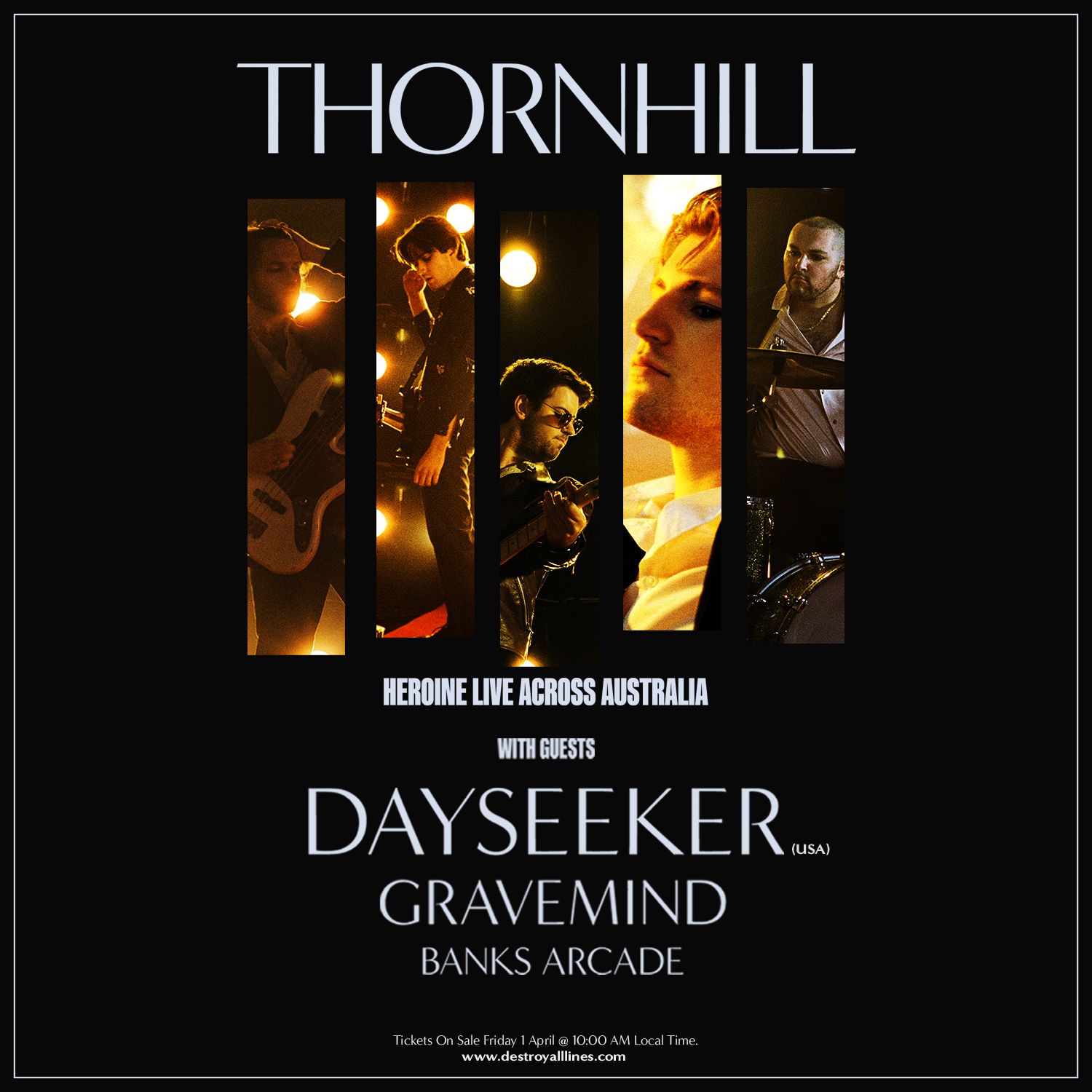 Following the recent announcement of Thornhill’s sophomore full-length Heroine releasing on June 3 on UNFD, the latest chapter in the Melbourne group’s scintillating journey won't stop there, with the unveiling today of a huge national Australian album tour this July.

Poised to celebrate the dynamic and visceral new release on stages across the country, Thornhill’s immersive convergence of alternative, rock and modern metalcore flavours will truly take flight in a live setting. Expect a theatrical and potent moment in time for fans and the band alike via an immersive and ambitious album wholeheartedly steeped in cinematic lust and tales of love, lust and self-loathing; this is Thornhill as you’ve never seen them before, and these incredible impending shows will stretch the reaches of metalcore and art with delicate and ferocious ease.

Along for the ride this July, American rockers Dayseeker are set to stun in their typical hard-hitting fashion, with local heavies Gravemind and Banks Arcade also joining Thornhill for these unforgettable evenings.

Forming in 2012, Southern California's Dayseeker mix metalcore and post-hardcore with pop-infused sorcery. A burgeoning staple on the Spinefarm Records stable, the quartet are renowned for their relentless touring and assertive sonic stylings, seen most recently back in 2019 with their fourth studio album Sleeptalk. Having previously toured with the likes of The Plot In You, Oceans Ate Alaska and Ice Nine Kills, Dayseeker bring a breath of unique air to the metalcore trope and their live show will bring some charming light and shade to proceedings.

Aussie heavy metal breathed a collective sigh of relief earlier this year when Melbourne mavericks Gravemind staged a heroic comeback, announcing new vocalist Bailey Schembri and revealing a biting new single Deathtouch to herald in a brand new era. With their debut album Conduit snagging a top 30 ARIA album charting spot, alongside support slots with August Burns Red,Thy Art Is Murder, Northlane and a recent festival outing at UNIFY Gathering earlier this month - Gravemind are primed and ready to take on the world with their bold and expertly-crafted creations in tow.

Another blooming modern jewel in the local heavy scene, Banks Arcade take cues from hard rock, electro and metalcore; if Northlane, The Prodigy and SAINt JHN had a baby, chances are Banks Arcade would be the eventual result. And from releasing their sophomore EP Fever Dreams, amassing over a million streams, to sharing stages with Stray From The Path and Counterparts, 2022 is entirely Banks Arcade's for the taking.